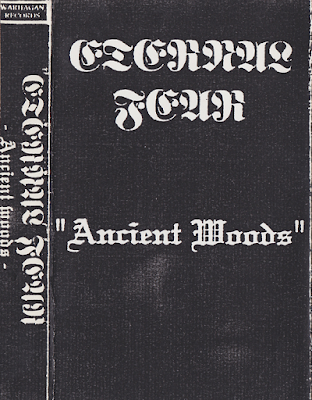 First music post for DE will be a pure dungeon synth tape from 1995. Polish based project. Tape spine says Warhagan records but a metal archives roster says Moonshine Productions. This seems to be the only project the solo musician Nerthon had, other than an appearance in 2003 to play some keyboards on a Carnal track.

Really classic dungeon synth sounds here. Fans of the dark 90s stuff will love this. Dark, brooding, and hypnotic. Definitely black metal intro/interlude/outro kind of material. Seven tracks on side A titled 'Ancient Hymns', maybe following after Nattens Madrigal. Side B is only two tracks, titled 'Atmosphere of Sorrow'. Kind of a strange melancholic end to the tape with 'The Celtic History'.

Descend
Posted by thekeeperovsekrets at 12:10 AM