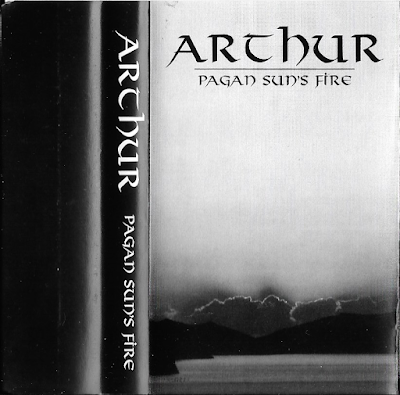 A new week and I've decided to do another tape rip from my personal collection. Pagan's Sun's Fire is the only release from Arthur, an eponymous project of Arthur Schkolnick. Pagan Sun's Fire came out in 2005, released with the help of Roman Saenko of Drudkh and Hate Forest (Arthur played bass on Hate Forest's 'The Curse') with no info on the insert other than the track name.

This is quite a full length tape. Nine songs with most hitting the mid-to-late five minute mark. All of the tracks definitely have their own feel and not many instruments are reused albeit the full on Guitar Pro midi drum set (don't get me wrong, I love it). The composure is quite fleshed out, the songs Witch, Song of Rainy Forest, and the melancholic yet triumphant Hate Is My Love being my favorite examples. Most tracks feature a full drum set, which may throw you off when they first come in but they're warmly welcomed once you've grown accustomed. Some might argue that this isn't 'dungeon synth' per se, maybe 'dark medieval synth rock' or something. True, it doesn't have some of the archaic sounds of dungeon synth keys and the full drum setup may liken it more toward conventional 'rock' music, but I would say this is surely in the spirit of dungeon synth if not dungeon synth itself.

A very solid and satisfying release, a shame that it isn't more well known.

Descend
Posted by thekeeperovsekrets at 7:02 PM