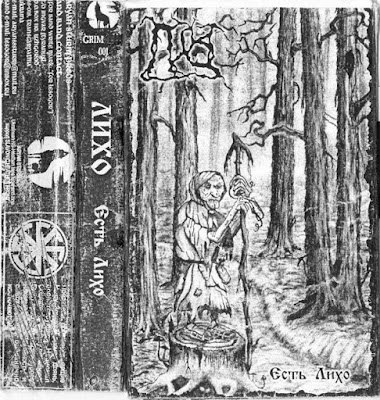 I'd like to thank Alexandr for submitting a couple rarities for the blog, it is very appreciated. I've been looking for this one for a while, physical and digital, but to no avail. I'm not sure how many copies exist exactly other than Discogs claiming there only exist an 'extremely limited amount'. I'd bet ten or less, so even a digital copy of this is a rare gem to have. Be sure to take a look at the want list on the side of the blog. Submissions allow posts like this to happen!

Here we have Есть Лихо, the only demo from the Ukrainian artist Лихо. This was realeased in 2000 as the first tape on the Aryan Sturm label. Лихо seems to mean 'evil' in Ukrainian. Online translators tell me the title of the tape means 'there is evil', or 'there is disaster'. I think it may mean 'evil exists', or something along those lines. If you know Ukrainian, please translate.

'Evil' is quite apt for how this tape sounds. Only three songs for this demo, all rather unsettling. The tape begins with a two minute prologue track which is admitedly somewhat run of the mill for lo-fi Russian and Ukranian DS, warping synths with some muffled drums near the end, but somehow still odd. The second track is where the evil really kicks in. A looping six second synth clip extends for nearly ten minutes, a wind sounding pad with some very lo-fi and far off almost orchestral synths. Garbled and distorted forest animals scream, dozens of frogs endlessly croak, and beasts grunt as the synth loop repeats in the background, eventually fading out. This is definitely an anxiety inducing track. Though not as long as Mortiis dirges by any means, the track doesn't seem to end. Once it does, it feels that you shouldn't have listened to it. The demo closes out with a very haunting and melancholic six minute outro, with some brief vocals near the end.

A very creepy release. The obscurity of this tape adds to it's unsettling sound and allure. The Blair Witch Project of dungeon synth. Tread lightly.

Descend
Posted by thekeeperovsekrets at 3:36 PM