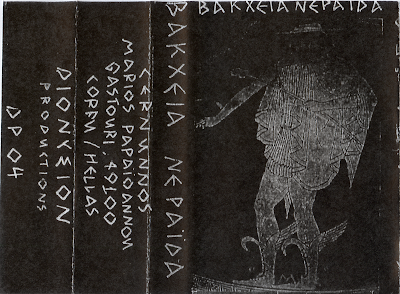 Another few weeks late on the posts. At this point, I may as well redact my weekly posting policy since posting has become so sporadic. I'll still try to do my best to keep this updated, but no formal promises.

Here's the last unheard Bacchia Neraida tape, Ermis. I am not sure if this was the initial release or if it was Dionysos. Ermis has a catalog number while Dionysos does not.  A shorter demo, only three songs, but probably some of my favorite BN tracks here. The tape starts of with 'Hermes', a rather haunting almost gothic track with a lot of black metal qualities interlaced with Athalwulf's narration and croaking. In the middle of the tape, we have Circe. Despite this track being pretty repetitive and vocal-less, it's probably one of my favorite BN tracks. Lots of strings, almost live sounding. Lastly, we have 'Kissoforos Vakcheios' (translated on the internet from the Greek titles, please correct me if I'm wrong. Mid-paced black metal feel that's driven by Athalwulf's flute playing. Weirdly melancholic. Thanks to my anonymous source, once again.

Descend
Posted by thekeeperovsekrets at 4:37 PM