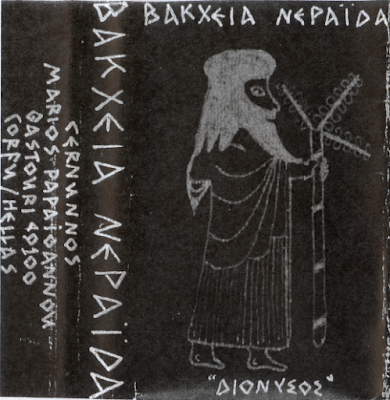 After a near two month hiatus, I'm finally back to uploading. Gathered some good stuff in my respite. Not going to make up for the weeks away, I'll just start posting weekly again. Hopefully everything will have been worth the wait.

For my first post back, I'd like to share a rather elusive tape that many have sought after. I wouldn't say this tape is 'mythic' or anything (no pun intended), just very difficult to find. I'm very grateful to an anonymous comrade who has been a great help in unearthing long lost tapes. Here's the first: Dionysos by Bacchia Neraida. BN is another of Athalwolf's projects, the Greek black metal force behind Wolfnacht and Cernunnos. Bacchia Neraida is quite similar to Cernunnos, but I'd say borders more on black metal sans any real string instruments. You'll notice the infamous flute whistling like a hawk on many tracks which makes for great atmosphere and a original/memorable touch.

All tracks are named after Greek mythic figures, though I wouldn't say the the tape resembles any traditional Greek music in particular, much more in the vein of medieval music (not complaining). This is a full length tape with eleven tracks clocking in around 45 minutes. You'll hear the flute a lot, which I believe is an actual flute and not a synth instrument, but the songs vary quite nicely in speed, rhythm, complexity, and tone. The vocals vary between a teenage sounding monotone drone, to high croaking shrieks, and occasional the more orthodox black metal screaming. I wouldn't call this tape pure dungeon synth as it plays with black metal structure quite often (blast beat drums come in at one point), but the grittiness of the recording quality and the crude synth sounds fit right in with dungeon synth tradition. More Athalwolf rarities to come...

Descend
Posted by thekeeperovsekrets at 1:18 PM