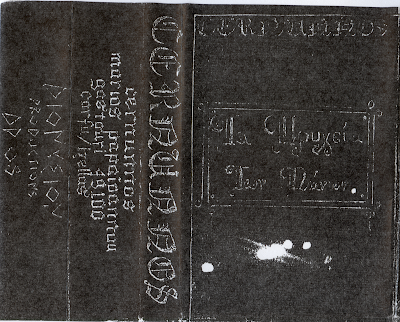 As you may expect, I've gotten more requests to actually make a schedule again for periodic posting, so I'm going to try my best to do so. From this post forward, I'll put forth all effort to post at least once per month. I have quite the backlog built up of things to rip and post, including a number of submissions, so I won't be running dry for some time.

As promised in the last Cernunnos post, here is yet another unearthed demo of his that until very recently has had virtually no mention online save for a couple 'for sale/trade' forum inventory posts, one collection list on a blog, and an infoless mention on his Metal Archives page. In the last month, the info for this tape was posted to Discogs, which I am very thankful for. The tape is labeled as DP 08, yet Discogs states that this tape came out in 1997, DP 02 being released in 1998, so 1997 might be inaccurate.The track names on this demo are nearly impossible to read from the scan I have and I've confirmed with the few others I know who have this tape that their copies are no easier to read. Luckily, the Greek names of the tracks were made available thanks to the Discogs post. I nearly uploaded this demo last month with three track names just left 'Undeciphered', but thankfully we now have some proper track titles. The tape name translates to "The Bunnies of the Nannon". Not sure if this is accurate, but it's cute so I'm not questioning it.

Τα Ορχυχεία Των Νάνων is much more raw and bombastic sounding compared to the previously posted Δασος Των Τραγοποδαρων Δαιμονων. Here we have four tracks percussion-heavy medieval dungeon synth. On this tape we're actually left without Athalwulf's signature flute playing, but we do have his memorable blackened whispers on the second track. Something about this tape reminds me of Bacchia Neraida's Ermis, perhaps it's the brevity of it, but it has a similar 'short and sweet' takeaway like I got from Ermis. All four tracks carry differing moods, a short yet satisfying demo. If you're not one for repetition, you may be a bit bored with this release. Each track contains a melody or riff that is well repeated, but in my opinion is still interesting and enjoyable. The third track has something of an awkward pause in the middle, soon followed by what seems the exact first half of the song repeated again (not just the same composition, it sounds like the same recorded track was turned back on a second after it stopped). Fans of the other Cernunnos releases will undoubtedly enjoy this, and perhaps listeners who aren't very keen on Athalwulf's flute-work will enjoy this as well.

Thanks to my usual anonymous Greek tape affiliate for this rip.

(I've uploaded this as a 7z file in order to keep the proper Greek characters in the song file titles, unarchive with 7-zip, if you're not already using it.

Posted by thekeeperovsekrets at 11:19 PM