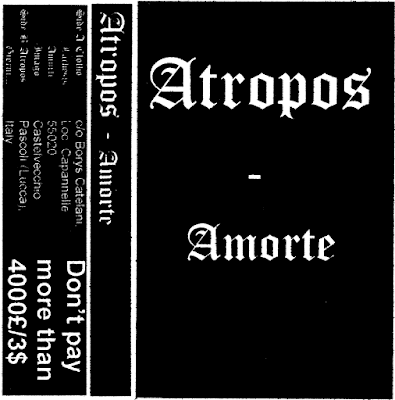 Huge thanks to my Russian and Italian comrades for this rip. I've been meaning to purchase this tape for some time, but before I did I actually received the rip for this along with a great insert scan from the artist himself, passed along to me by a Russian friend who is always a big help with getting some obscure stuff. This is the first tape by the duo Atropos. Atropos was active in the later half of the nineties as a smaller project of Borys Catelani, founder of the Agipunk and Tetanus labels and front-man of the death doom band Forgotten Kadath and guitarist for the crust band Giuda, and Maurizio Guccini, instrumentalist for Forgotten Kadath. As far as I'm aware, Atropos released four tapes between 1995 and 1998, two being splits, one with Forgotten Kadath and another with Myricae, the other full length tape being posted here eventually! If anyone has either of the two splits, I'd love to hear them.

Amorte is Atropos first release from 1995 and to me is definitely the weaker of the main two releases, but that's not say this one isn't without its merits. The tape opens with Clotho, a fairly lighthearted short song with a deep synth bass pad, playful synthesized pan flute, and live recorder playing (off key at a few points). Reminds me a bit of Bacchia Neraida's or Zweilicht's flute playing. After this brief track, we have Lachesis, a multifaceted song that's almost set up in separate phases. The recorder continues on in a simple melody reminiscent of a campy fantasy movie opening. Eventually the song breaks down and gets darker and incorporates some raspy whispered vocals. Again the song mutates an turns to a church organ as the darkness increases before transforming back to a lighter tone recalling the beginning of the track. The contrast between the simplicity of the first and track and this near twelve minute fantasy journey is nice and the variation keeps you attentive. An odd percussion track follows that is rather sloppy in timing. Not too big on this track, almost seems like its a pallet cleanser after the evolving Lachesis. The A side finishes off with Imago, a rather short folk-ish transition song that brings in acoustic guitar, probably the prettiest song on the tape.

The B side picks up where Lachesis left off, cutting the lighter feel off and diving right back into a slow building darkness with many elements of the previous epic, church organs and whispers included. A tolling bell at the track's end leads us to the outro Giorni... which in my opinion is the creepiest song on the tape. A period of silence, and we're given a hidden black metal acoustic synth burst outro complete with some falsetto wail screams. A fun way to end everything.

Overall, Amorte is enjoyable but it feels like the duo is still kind of getting their ideas together to create something larger. I don't fully consider Amorte to be a dungeon synth tape, proper. It incorporates a number of dungeon-y synth elements that provide a lot to the dark lo-fi atmosphere, but there's just something to it that feels different than much other DS tapes. Maybe some would consider this more as dark ambient with folk elements? Perhaps experimental DS? Maybe you'll disagree, give it a listen.

Posted by thekeeperovsekrets at 2:20 PM