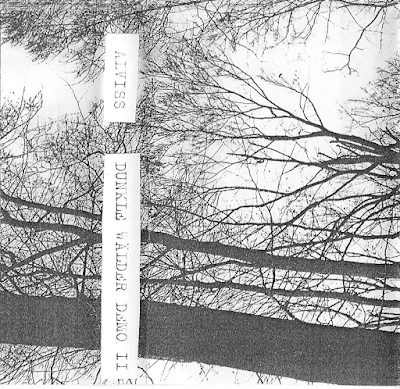 Sincere apologies for a delay in posts. This one will count as the August post. I'll post the one for September soon, and the October one should hopefully be coming soon as well. Also, many have informed me that a number of download links have died. All dead links have been reuploaded with nofile, which seems to be the most reliable service I've found so far.

I've been holding onto to this tape for a while so thought I'd throw in something new before uploading the last Arcana Liturgia tape. Here's the second demo from the German artist Alviss. You might know Alviss from his short first demo 'Fafnir' which Ascoven uploaded last year. Dunkle Wälder is a bit of a bump up in terms of dynamics and variety, but still sticks to a minimalist delivery, leveraging imagery with sparse, repetitive, and hypnotic sound. I think this demo is better than the first, and clearly shows the artists growth. No date here as with the previous demo, but I would peg this either some time in the same year, '96, but more likely '97 since there is a noticeable difference in compositional variety and sound. There's some static crackling a bit in the recording, namely in the first track, but I've checked with multiple tape players and this is part of the recording itself and not the player I used to rip the cassette (perhaps it's the cassette tape itself, but it seems to be in perfect condition).

Dunkle Wälder, like Fafnir, features three tracks, though these three differ much more than the single synth used previously. The first track is a rather odd and delay-laden minimal track that only serves to confuse you. I feel this track is more of your entry into the dark forests (the English translation of the title), the first steps into a path-less expanse of trees and leaves with no sense of direction. Next we come a upon a flowing stream. We lay down and begin dreaming as wind brushes over us. Traum (Dream in English) is much more recognizably DS compared to the first track, with drawn-out synths blanketing nature sounds. You can kind of hear the keys press down on the keyboard at times. Lastly, we come to the heart of the dark forest, to the Tor zur Unendlichkeit, the gate of infinity. Whether this is within us, brought out by the spirit of the forest, or if this gate is physically happened upon through our wandering is unknown, or perhaps we are unable to differentiate between the two; but we are here, led my drum rolls and melancholic yet uplifting ethereal synths into the gate.

Descend
Posted by thekeeperovsekrets at 3:39 PM