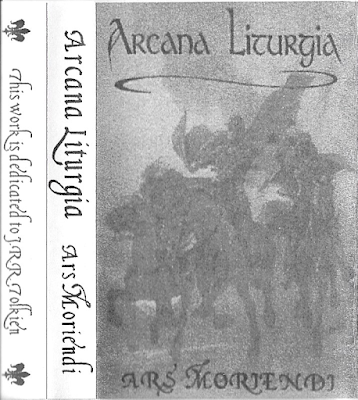 Back for the official July post (the previous counting as June's) with the second tape from Arcana Liturgia. Glad to be putting this artist into the canon because he really deserves the attention. Ars Moriendi follows the artist's first tape, MCCXXXI, a year after with a fuller sound and more complete concept. Simple j-card layout with a dedication to the great JRR Tolkien. The artist looks a lot like Neige.

As the insert will describe, Ars Moriendi tells the tale of a great warrior, meant to musically transport us back to a time of chivalry, swords, and all that good stuff. Each track represents a part in the story of the life and death of our subject. Every track fits extremely well with its intention; even without the guided insert, you can glean what is happening based off of atmosphere and composition, which a great feat for an artist to accomplish. In Act I, the soldiers line up on the field, militant and true, putting their life on the line for their cause. Act II depicts the praying warrior before battle, calling for strength and protection. For Act III we have some epic fight music as the war erupts. Pounding drums, driving leads, perfect concept synchronization. An ominous Act IV puts the warrior in the face of death to be taken from the Earth (or Middle Earth?). This track kind of reminds me of music late in a Doom game, kind of somber and hopeless but still tense. The second half of this track breaks from the bombast, softer melodies but still dreadful. Our warrior has perished. Act V serves as the mourning song, a piano elegy. You can picture the tears falling from the cheeks of the warrior's loved ones. Evocative stuff.

Ars Moriendi clocks in at around 25 minutes in total with 5 songs, which may seems short for some listeners, but I feel this tale is very complete. Kept my interest from start to finish and really drew up some imagery. Looking forward to posting the final Arcana Liturgia tape soon enough.

Descend
Posted by thekeeperovsekrets at 6:46 PM