Arcana Liturgia - The Reign of the Mighty King 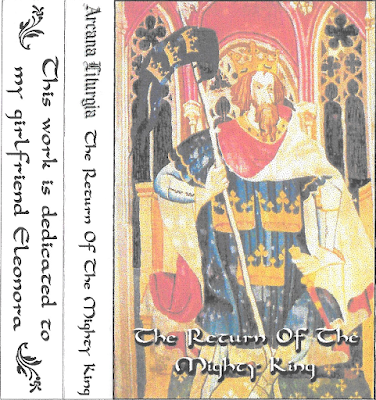 And at last, the final tape of the three original Arcana Liturgia releases: The Return of the Mighty King. Back a little early since I wanted make up for such a lapse. I've had this on the shelf for quite some time. Originally, this was the release I had planned to post after the last Alviss post in 2017, but equipment issues at the time kept me from getting a decent rip of the audio. After far too long, I'm happy to be posting the most epic of the three class AL tapes. In the meantime, Arcana Liturgia has actually come back to making music, and the new stuff is great, picking right up where he left off many years ago. His first album in 20 years, Tales of an Ancient World is on Bandcamp with a tape on High Cathedral Records (though I believe this is long sold out). AL's previous demos also got a recent re-release in one tape on Gondolin Records. Different mix than the rips here, definitely check them out.

King comes as a natural progression from MCCXXXI and Ars Moriendi, creating an epic tale of an usurped king on a journey to reclaim the throne from his deceitful brother. Lots of instruments and atmospheres featured on this album with some familiar sounds from the prior two tapes but really put to the test of building a grand story. What this album does best is allow the music act as narrative. While each track serves as a scene in the king's journey, the music really speaks for itself in guiding the listener through this tale. Occasionally, narrative/spoken vocals are used to add to the story-telling purpose of this album, but they are sparse enough where they only add flavor and override the music. My favorite moments in the album are the combination of the tracks "The Return of the Mighty King", "The Death of Edris", and "Honour and Glory". The final battle between brothers occurs. The bulk of the self-titled track has this kind of tense yet understated repeated passage with piano, choir leads, and drums that represents the action between brothers. This isn't your typical boss battle music, but something more uncertain and understated. The track transitions into some somber piano moments where its as if the king is accepting the the troubling task of killing his brother. The queen soon comes in congratulate the king on his victory. The following track paints the scene of Edris' funeral, melancholic yet hopeful in tone. The sadness doesn't stick around for long before the victorious tavern fanfare of Honour and Glory begins in celebration the king's victory and the freeing of the land of Alghor.

I recommend reading to the j-card story to get some background of what's going on before listening. We even get a map of the king's travels to follow, another fine touch to the lore of the story. A great tale to conclude the history Arcana Liturgia, with future chapters now unfolding.

Posted by thekeeperovsekrets at 10:04 AM