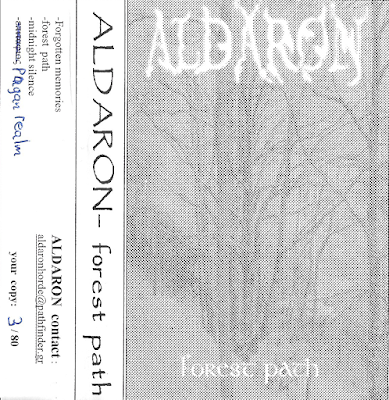 I was very lucky to come upon a copy of this recently on Discogs for an overly reasonable price (thank you, friend!) This tape sits both on the periphery of dungeon synth and deep into its core chambers where the isolated bedroom naivety of the genre materializes. Forest Path by the Greek artist Aldaron is the first of two short demos the artist released in the early to mid '00s. I believe this one was self-released while the other demo, When Dawn Rise Again, which I'm still hunting down, was given a release from what I'm assuming is the artist's own label considering its the only release on the roster. Essentially self-released either way. Forest Path from 2004 is a short demo though it is nothing short of intriguing. What we have here are four tracks of sparse Roland Soundcanvas MIDI instruments, totaling about 11 minutes of playtime. The on-point timing here makes me believe that these were written in a tablature program, perhaps Powertab considering the date and since there is no drum-kit being used. The j-card credits the artist for guitar and synth, but I don't think anyone's being fooled into believing the guitar here is real. Not saying I don't love the old MIDI sound, though.

What is striking about is this tape is that the tracks somehow avoid having a recognizable or familiar atmosphere. Perhaps it's the overly accurate timing due to the program being used to compose the songs, but there's something just unfamiliar and vaguely alien about this whole thing. Even the title track, which is the most conventional of the four and is actually rather 'pleasant', still has an anomalous sense of confusion. I am indeed transported by the music, but not to where I am often taken. Whereas other DS releases may take you to fantasy realms of wonder, or medieval scenes of old, the forest path we are set upon here is from another world formed by unknown magics, a scene constructed to look like our own surroundings. The soil, the trees, the smell of wood, the branches snapping underfoot, are all conjured by an inhuman wizard attempting to recreate the human world. Occasionally the artist jumps to an off key note, yet it remains true to its intention. The instruments mesh at times and clash at others, experimenting with each other to give us the forested images we wish to see, but their form is warped, even uncanny. Volume fades and swells and you become disoriented. For some reason, you cannot stop wandering down this unnatural path. There is an end, but it remains perpetually out of reach. At that end sits the inhuman wizard, bent over his alien tomes, casting unearthly spells to construct the world in which you wander, a world he wished was natural. A verdant vision from the nonexistent childhood of the most innocent of demiurges.

I would say that Forest Path sits well within the realm of Hekaloth material (Xynfonica, Gluttony, etc.), though on the folkier and less dissonant side. The demo is intriguing enough to warrant at least one listen, but this isn't going to be for everyone. However, I know there are some of you who will listen to this over and over. I'm on my fifth listen this morning.

Descend
Posted by thekeeperovsekrets at 8:26 AM