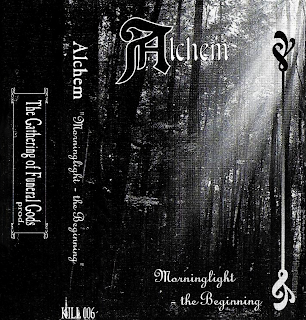 Hope you all have had a good year. Coming close to another year between posts. I really have no good explanation! Life is very busy and full these days, and rarely do I get to sit down and do nothing but listen to a tape; however, this night I've been able to do just that and take the time to cut ripped tracks and write up this post. So here you are.

Alchem's Morninglight - The Beginning always piqued my interest after finding its lone discogs page. The j-card, titling, lack of info, and its whole presence exuded 'dungeon synth', a foresty lost relic that seemed to be just the kind of thing I would love. I was hinted towards this artist from the single mention on (the classic) Asmodian Coven blog, on the side-panel requesting help with lost rips. Years later, a good friend of mine acquired this in a private overseas sale and was generous enough to send me a rip of its audio, including scans of the j-card. Finally, this obscurity has come into the (morning)light.

Morninglight - The Beginning is seemingly the only release from Poland's Alchem, released in 1998 through The Gathering of Funeral Gods Productions. For those privy to cult status 90s black metal tapes, you may know this label as home to the original issue of the first LSSAH demo. From what I can gather, I'm betting this was either a vanity label for one artist behind the only 3 projects present on the roster, or it's a small group of friends from the same area in Poland.

The tones present here are very foresty, airy, druidic, and overall rather pleasant. The melodies are fairly simple but nonetheless catchy and welcoming. 7 tracks make up the entirety of the release with each title matching the general feel of each track. The tape opens up with bird sounds and some minimal keyboard tones leading directly into the first proper track, 'Last Warrior'. Long droning chords often back up a track while other orchestral presets create melodies that build and layer on each other. The artist uses repetition quite well, almost in the way that dance artists construct their mixes. Track 3, 'Journey Through the Misty Lands' might be favorite on the tape, a breezier and slightly more somber song that invokes a foggy image of wandering through the heavy misted fields of a world unknown. Two tracks on the tape titled 'Kold's Way' reference 'stages' of sorts, which I'm guessing is supposed to be an imagined video game soundtrack. There is something a little more engaging about these two tracks that I could see working in a dungeon crawler. Morninglight is a generally pleasing tape that I'll be returning to every so often. While not groundbreaking by any means, it's well made, evokes nice imagery, and doesn't bore in its repetition. Check this out if you enjoy Cernunnos Woods or Era of Ice, similar synth tones and feelings.

You'll notice in the download that I've left a few different versions of tracks. The j-card references these tracks really as two distinct pieces divided by sides of the tape, with movements within. The tracks were easy enough to split save for the very first two which flowed together seamlessly. I've included versions of the entire sides as well as the split up tracks, so take your pick (I prefer split tracks just for the sake of keeping the titling accurate to the smaller movements). I haven't removed any of the hiss between the split tracks, so they'll still match up as they play and you won't notice a shift when listening to the full thing in a playlist, save for the shift to side B of course. Lastly, side A was mixed or recorded a little bit hotter than side B, so I've included versions of the B-side tracks with a bit of a boost to match the levels of side A. The hiss between tracks is still not as pronounced, but they do match a bit more in presence. Note that the download is a little larger due to all of these inclusions.

See you... some time

Posted by thekeeperovsekrets at 9:14 PM