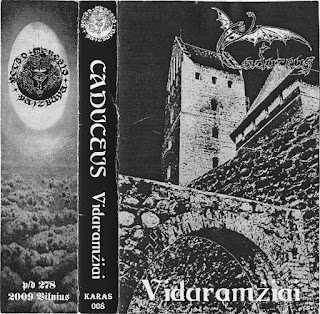 Hello, readers. Has been another long lapse, my apologies again. Free time is quite hard to come by for me in such a weird year. Figured since the holidays are coming up and since the solstice has arrived, I'd share in the spirit of giving by providing a new upload for everyone. Still much more to post, but being that this release is among the most legendary and elusive recordings in maybe the whole genre of dungeon synth, it's about time it got put it out there.

If anyone was unaware, the last Caduceus tape Middle Ages was revealed to be little more than a collection of tracker songs from the 90s that were stolen and released as Caduceus' own music. Went a very long time before anyone noticed, but thanks to some keen ears among the tracker-users in the DS genre today, all has been revealed. You can read more about this here.

Viduramžiai is the infamously impossible to find second 'release' from Caduceus released in 1998, apparently only circulated among his own circle of peers in Lithunia back in the day, with many being quite withholding of information about this. But now here it is, a 40 minute neoclassical dungeon synth monster of cinematic composition and dusty dungeon romanticism. This rip was provided to the blog by a well trusted confidant (who will remain nameless unless they wish to be named) with a great deal of insider info. Some very slight editing has been made to side A to improve audio quality, but this diminishes nothing from the base sound. Alas, Viduramžiai is another case of tracker .mod file theft. While posed as two compositions comprised of smaller movements, the tracks within are also stolen from tracker music artists without their knowledge. So far among the Excavators, we've identified one track within this tape as being 'Kingdom Skies' by the artist Jase. This track appears at the 15 minute mark on side A. Being that Middle Ages was entirely stolen and that we've already ID'd one stolen track here, it's safe to assume that the rest are also stolen. Very unfortunate that these original artists never got the proper credit for their music which is now lauded as some of the best 'old school DS' in the genre, but it's good that we can now begin to appreciate the contributions of artists that we would otherwise be unaware of. If you're able to identify any other songs within this tape, please email me.

Now, scandals aside, this is another monumental release of extremely well composed fantasy music that would fit squarely into the cheese of 80s and 90s sword & sorcery films (if only!) Sweeping orchestration, complex percussion, emotional crescendos, atmospheric dark synthesizers, it's all here. In fact, this might be outside of the taste of many DS minimalists who prefer the somber straightforward stylings of many modern bedroom projects, but for many hi-fi fans or OST listeners, you'll certainly love this. If you want an even higher fidelity taste of similar music, browse through the medieval and classical tags on sites such as Mod Archive wherein many of the true Middle Ages originals are available, including 'Kingdom Skies' from this tape.

So, take it as it is. Enjoy the music that is here and keep in mind the true artists behind these compositions. I guess we could say thanks in a sense for the timeline where this whole ordeal has led us to discovering or rediscovering the demo scene tracker music history of the 90s. It's terribly unfortunate that this music comes to us through the unveiling of theft. Even in the modern day we've seen similar scenarios in the genre where various tracks or even whole albums are stolen and labeled as another artist's music. Just goes to show you, nothing stays hidden for too long.

Posted by thekeeperovsekrets at 2:32 PM