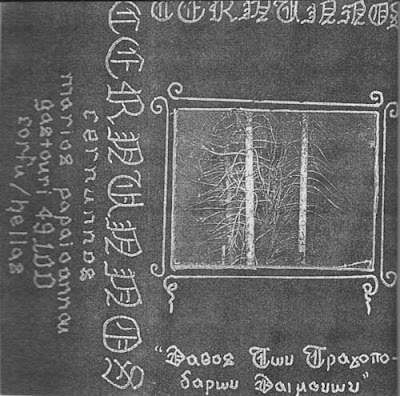 I haven't seen this posted on youtube or any other blogs, so here it is from my mp3 collection: Δάσος Των Τραγοπόδαρων Δαιμόνων by Cernunnos. The Greek title translates to 'Forest of Goat-footed Demons'. Released in 1998 on the 'Dionysion' label, which I am assuming is the personal label of Athalwolf, who fronted this project along with Bacchia Neraida and Elfen who are also featured on the label's roster. Athalwolf would later form the infamous Wolfnacht NSBM project.

This demo differs a bit from Cernunno's later and more well known tape 'Trollfjord' from the Chanteloup label. 'Forest' is much more a traditional demo, tape hiss included. This one has hand drawn art, which I appreciate. Very similar to Dionysos by Bacchia Neraida. Trollfjord had a more put together sound and a bit more variation, but Forest is still an interesting tape in its own right. Side A of the tape is somewhat whimsical and not very percussive, melancholic at times. Archaic and minimal synth accompanied by reverberating flute (recorder? ocarina?) with Athalwolf telling us of ancient myth in his droning and obscured whispering voice. Side B brings more percussion, booming timpani for the heat of battle. The track 'Ta Bonna Ton Manron Etoiheion' is quite triumphant. The tape finishes off on a more melancholic note after the bombastics. Another fun tape from Cernunnos. If you enjoyed this tape and you're not familiar with his other project Bacchia Neraida, I'd give it a listen as well. (I'm currently on the hunt for the elusive Dionysos demo, hopefully I can get it to you soon!)

Also, if you have a better scan of this tape insert, please email me.

Descend
Posted by thekeeperovsekrets at 2:08 PM