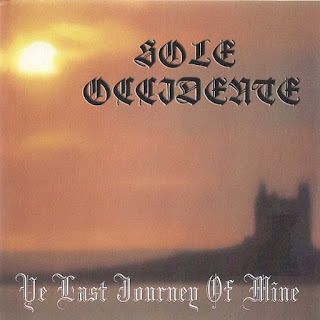 Hello again, readers and followers. It's been some months since the last post, but hopefully people are still checking in from time to time. Still have quite a backlog to get through, so the blog won't die off anytime soon. I have lots of priorities these days, but I wanted to squeeze in another post since everyone's stuck at home lately. Some new (old) dungeon synth can hopefully ease the mind. Hope you're all well.

Instead of the usual tape rip, here we have a CDR of the only album from Ukranian artist Sole Occidente. This was released in 2003 on OMS Records, who put out some other underrated DS albums back in the early 00s like some of the Old Monk's Saga material and the much overlooked Silentium/AR split. Sole Occidente is work of Duke Amduscias, Incubus (comma included) who also fronted the black metal project Ignis Nocturnum which produced a single tape release 5 years before this SO album. This upload was made possible by a longtime patron of the blog whose knowledge and resources are always bountiful. Thank you, again.

The overall sound of this album is reminiscent of the very early Bandcamp era of dungeon synth, with digitized instruments creating thoughtful and ambitious compositions coming from a very grand personal fantasy world. I know I've heard these particular instruments before, but I can't quite put my finger on where. It's a very string heavy album which at times reminds me of Darkstroll, a classic from this early BC era (I highly recommend the compilation Sounds of the Taiga on Dungeon Lore Foundation, one of my favorites). The moods on this album recreate a varied and long adventure for the listener, with some tracks like the opener giving a very verdant and bright mental image while others like "Ye Crying of Lilith" painting a much darker and dreary sort of gothic atmosphere. As I said before, the strings here are always at the forefront in various forms: harps, violins, piano, cello, even harpsichord in a few places. While each track may intend a different image mood, the compositions are always driving forward with lots going on. You don't get much of a break here as the pace stays fairly consistent throughout, only slowing down at times when focusing in on creating a darker atmosphere. With 13 tracks in total, things do tend to blend together a bit in places since you're mostly getting the same instruments in each track with a similar pace. Two tracks that really stand out to me are "Ye Crying of Lilith", which has a strong gothic tone and serves as something of a dark respite during the surrounding upbeat and adventurous tracks, and the track "Ye Circle of Ye Fate". Ye Circle features a kind of Asian sounding flute tone, which is a new and welcome element, and there's something about the composition that reminds of Steve Reich. I'm not versed in music theory so I can't explain this very well, but there's just something about the key that this is written in or the range of notes being reached that gives me a modernist vibe. Great track.

Overall, there's lots here to catch your attention. You can hone in on one instrument at a time and follow an interesting melody or take it all in its in digital grandeur. That said, something about the similar pacing per track and the repeated instrument patch usage makes things blend together at times, but the tracks that do mix it up really stand out. I can definitely see this being a great background RPG album.

And here ye have ye download for ye listening pleasure:

Descend
Posted by thekeeperovsekrets at 5:34 PM