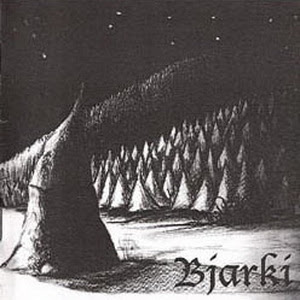 Big thanks to Eugene and Andrew for the files for this one. Much appreciated!

This album was listed in the famous 'Dungeon Synth List' from Andrews blog some years ago. Although now deleted, it lives on here and here. Bjarki is the sole album from the Italian artist Askhem, initially released in 2003 on CD. What stands out initially in this release is it's influence directly from the greats, Burzum and Mortiis. In fact, the second track 'Hvit' starts off identically to 'Han Some Reiste' from Burzum's Det Some Engang Var, and carries the original spirit of that track in a new way (an re-interpretation, if you will, of the original). The album also brings out influence from the brass selections of Mortiis, triumphant trumpets to carry us into the night. However, though you can hear Askhem's influences, Bjarki still stands on its own.

The best part about this album, in my opinion, is its dabbling in neoclassical melodies and orchestral composure. Tracks like 'Fading in Moonlight of Velvet' and 'Tune of Doom' are exquisitely well written and add a refreshing classical voice to the album. The songs are quite varied and don't repeat themselves, going from Burzum-worship, to neoclassical, to medieval, and 'Symphony of Northern Skies, Part 2' actually reminds me of RPG music.

A very well rounded release from Askhem. Gone but not forgotten. If anyone has a physical copy of this release, scans would be lovely!

Descend
Posted by thekeeperovsekrets at 7:55 PM