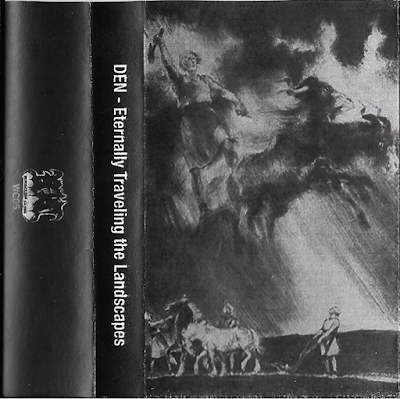 Old material here but only released last May. Withering Crypt has put out some pretty rare stuff from the Burning Northshore odalist scene in the 90s. This tape collects some material from Den, a project of Lesiu, who apparently fronted a few other Burning Northshore bands. Some of these tracks been put out on previous releases, some of the material is was unreleased, I'm assuming the Untitled tracks never got put out. I believe this tape is sold out everywhere at this point, not sure how many were printed. Withering Crypt will continue to reissue BN releases, check the label out, good stuff. Thanks to Wood Path for the tracklisting on this tape. Another personal tape rip. High quality files as always. I didn't scan the back of the insert. It's just black.

Some very classic lo-fi dungeon sounds. Archaic keys, timpani, pan flute, and strings evoke the Odalist tradition. Everything is played analog, no computers here. Well composed and interesting. Guitar carries one track along really well, might be my favorite on the release. Only six songs total on this tape, I'd say there are about 10 more Den tracks out of print. Hope to see more arise soon.

Velkaarn over at Asmodian Coven somewhat recently posted a Burning Northshore zine that's worth checking out. Short, but insightful.

Descend
Posted by thekeeperovsekrets at 6:42 PM