As some readers may know, a number of second wave black metal acts who dabbled in electronic territory were greatly influenced by Tangerine Dream (Varg, in particular). If you're not familiar with the music of Tangerine Dream, they composed the soundtrack to the movie Legend, this may give you an idea of their sound. Ethereal synths, slow reverb-laden drumming, the occasional guitar, pretty spacey sounds. TD is a vital component of what would be the 'Berlin School' of electronic music. The two tapes I've uploaded here are arguably part of this sound, though more fantasy driven.

Kirkwood, later using his full name Jim Kirkwood, was a very prolific artist composing fantasy themed Berlin School/dark ambient/drone/dungeon synth/etc who has put out somewhere around 70+ albums between 1991 and 2011. I've chosen two of his earliest tape releases to feature on here today, Master of Dragons  and Nightshade in Eden from 1991. 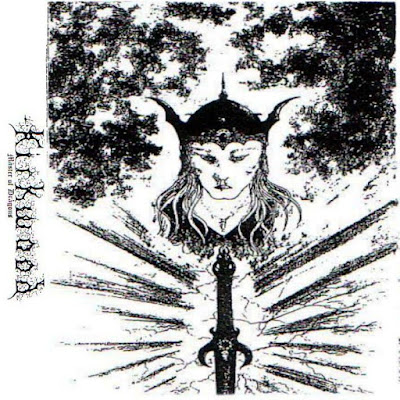 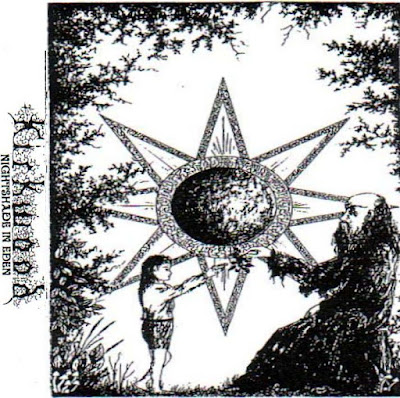 (Apologies for the low quality cover art. I've included some better pictures of Master of Dragons in the download but this cover is all I can find from Nightshade in Eden.)

These are both rips from the original tapes, not the the reworked ones that were released much later on in the 2000s on CD. Pretty interesting stuff. Master of Dragons is the more conventional release of the two. Heavy astral pads envelop you in darkness, spacey synthesizers soon come in to lead you into caves unknown for a perilous adventure. This tape reminds a lot of old sword and sorcery movies. It's not exactly the Conan soundtrack but it certainly has that campy 80s fantasy feel, sci-fi-ish at times. Nightshade in Eden is the more sinister tape. You've ventured further into the cave, to the point of pitch darkness. You can feel odd flora brush by as you stumble ahead. Venture further to see a dull glow. The flora begin to illuminate your path, but only to your dismay. Strange creatures hang from the ceiling and latch to the walls, watching you as you trudge on, following you with their bright pale yellow eyes. Eventually you make your way out, but there is no time to rest, desolate and forbidden lands await you ahead.

Again, these aren't pure dungeon synth, Kirkwood may not have even been aware of Mortiis or the electronic Burzum tracks (or maybe even black metal at all, who can say) but DS fans will certainly enjoy these tapes.